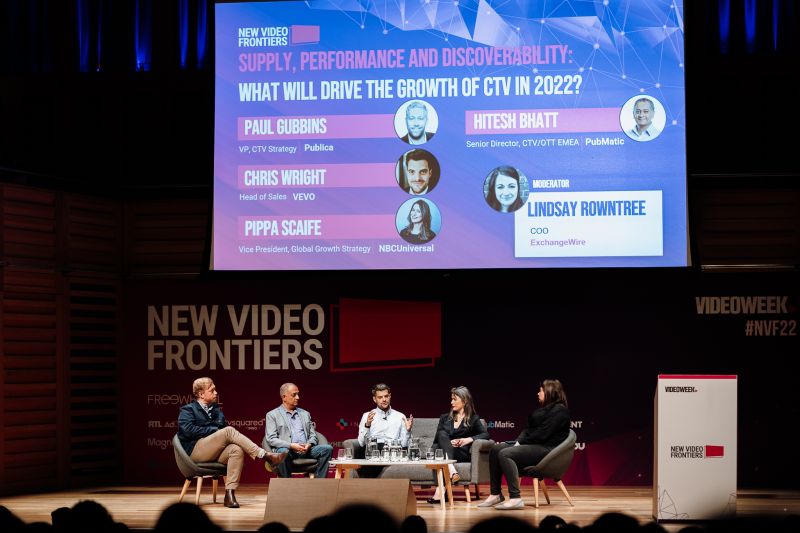 Publica’s Paul Gubbins joined a New Video Frontiers panel in London to answer the question we’re all asking: What will drive the growth of CTV in 2022?

The panel kicked off with a discussion surrounding the current CTV landscape in the UK. The group acknowledged that although the UK is currently behind the US, there is promise for rapid growth.

“I think from where we were several years ago when most people couldn't figure out how to navigate their connected television,” Paul Gubbins said about the status of CTV in the UK. “I think we've come light years ahead of where we were. I think this year is all about discovery. More and more TV viewers are proactively searching for ad supported or low cost streaming services driven by the cost of living.”

As a broadcaster with many many different brands underneath you, what are you seeing in terms of the ad funded opportunity out there that exist outside of YouTube?

“We as a business, we touch CTV in a number of different ways.” Pippa Scaife responded. “We're seeing huge growth outside of that YouTube environment and CTV is offering us a vast range of opportunity that sits well alongside our linear inventory… We've invested an awful lot of time and resources in thinking about what innovation needs to look like on a CTV platform to move us away from the more traditional ad models.”

The discussion later evolved to contemplate the value of a viewer or audience and how they might differ across platforms.

Is a free user more valuable than a paying user?

“I used to work for Spotify, and they actually valued the free users more than the paid for users because they were the door into the paid for,” Hitesh Bhatt said. “So I think that the businesses will value their free audiences as much as their subscription audiences. It's really hard to say which will be more valuable depending on who's subscribing, what your campaign is, your objectives, etc. That's a tricky one to predict at this stage.”

“I'm interested to hear that Spotify values the ad funding users more than the premium subscribing users,” Chris Wright added. “I feel like from an average revenue per user perspective, the subscription is kind of the gold standard, right? So yes it might be a step into it, but I feel like it could be also cannibalistic to those numbers. I feel like you could also argue that the more affluent and therefore more desirable audiences are still behind that table as well.”

Will new advertisers in the CTV space be pushed out by bigger, traditional advertisers?

“It's not a question of traditional TV advertisers versus new entrants to the TV space,” Paul Gubbins said. “It's about bringing incremental budget to television. Hopefully we're going to be sat here in two years time and we won't be having CTV panels. It will go back to what it was five years ago and we'll just be discussing television.”

“It's television, but the way you plan, the way you buy, the way you measure is drastically changing” Paul continued. “That's what CTV is. It's a new approach to delivering ads on a television. It's not a brand new concept. It's just a brand new way of trying to figure out how to reach them, and then measure and quantify that the ad spend has been effective.”

“Yeah, because TV is the aspirational medium, right?” Hitesh Bhatt added. “If you can get on the big screen and deliver performance and deliver results, then that's where the money's going to go.”

The conversation went on to ask how CTV is internally discussed and what the space should look like going forward.

“I think in kind of the moment in time that we exist now, it's very much a complementary proposition to linear,” Chris Wright said. “To think about the concepts of pricing and inflation that we're seeing on TV obviously, that perfect storm has kind of created inflation on linear TV.”

“I mean there's no denying it's a huge part of our future. It's a huge part of our present.” Pippa Scaife added. “It is one of the things we talk most about internally and externally. I will say that we are a global business in the true sense of the word. We have consumers in 150 different countries, and CTV means something very different in different markets… We have to think about everything with a global lens and an understanding that we are accelerating at different rates in different parts of the world.”

‍Watch the full panel here for more insight into the immediate and long term future of CTV in the eyes of the industry's top companies.