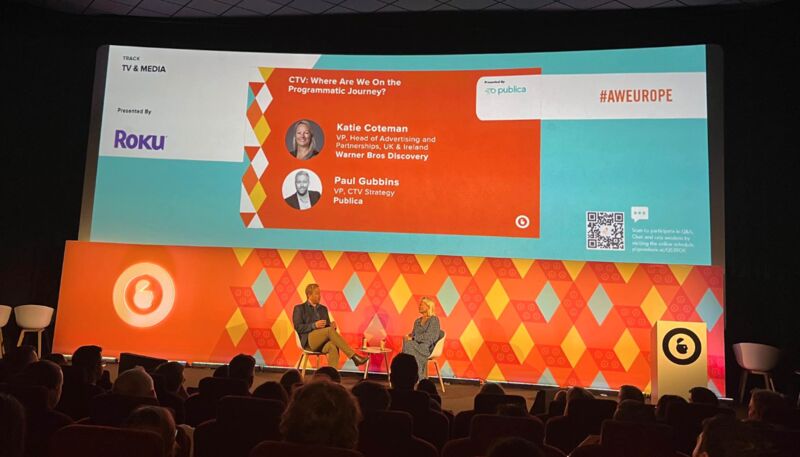 Where are we on the Programmatic TV Journey?

It was such a privilege to not only attend Advertising Week Europe, but to deliver a live Q&A session in front of an amazing audience of advertising professionals, especially after years of restrictions on in-person events!

“It really depends on who you're talking to,” Katie said.  “If you talk to kids, for example, what do you watch on television? I did this in a school recently, they don't know what television is. Even though they are viewing their content on a big screen, which a lot of them are, they would never talk about content. Consumers generally do, it is about the delivery method. So it doesn't matter if it's streaming or if it's a linear TV, they talk about TV. But it's advertisers and the advertising industry that make it a bit more complex I think.” Although the definition of TV content might be debated, we’re seeing a clear trend among viewers who are opting for ads.

Katie attributed the recent industry trend to a combination of factors, but believes we’ll continue to see this shift between AVOD and SVOD in the future. “There's a lot going on, obviously macro issues, around affordability, too much choice,” Katie said. “I think Q1 was maybe a bit weaker from a content perspective. I think as we get more choice, you definitely will see people coming in and out of services more often.”

How do you manage things like frequency in CTV ad breaks?

katie agreed, recognizing that this concern is heightened for paid platforms like Discovery.“It's even more important for us because people are actually paying for our products,” she said. “...but programmatic enables us to source new advertisers, it enables us to bring about diversity of advertisers on the network. For us, user experience is king, absolutely. You can't drive people off site, and so effectively some publishers because they have a lack of demand that's why you have those issues sometimes around frequency.”

Why does there still seem to be a disconnect between traditional TV measurement and the growing streaming ecosystem?

“Fundamentally though, where the disconnect is coming from is agreeing what that single unit of measurement is,” Katie responded. “That's the biggest issue… somehow we need to meet somewhere, but that's proving to be quite challenging.”

Watch the full fireside chat to learn about other issues facing programmatic CTV advertising and what the industry needs to move forward.