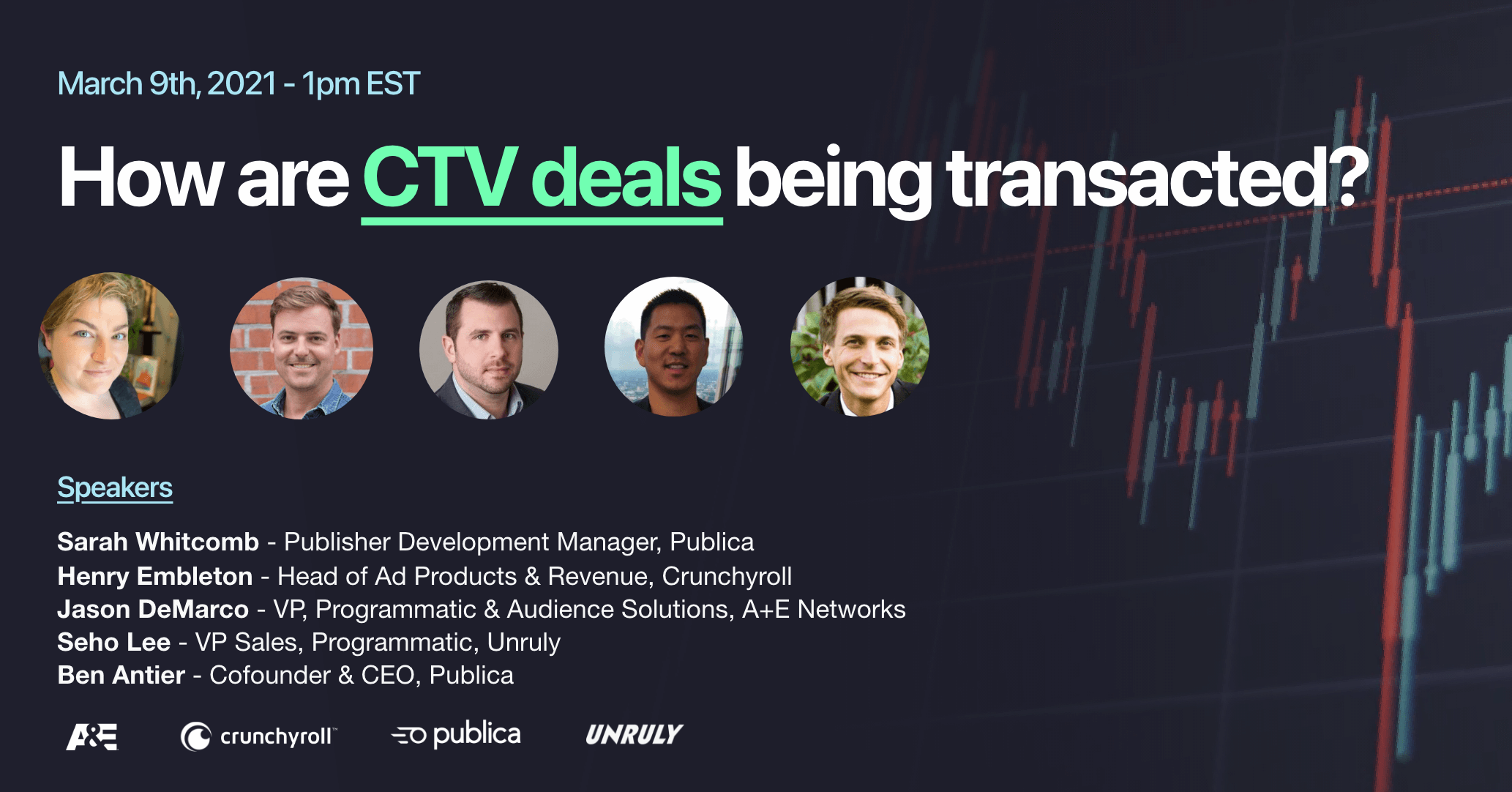 How are CTV deals being transacted?

On the 9th March, Publica hosted a webinar where we pulled together leading publishers & an ad exchange from the world of CTV to discuss some of the areas that are currently shaping the ad funded streaming ecosystem.

The topic of this webinar was programmatic CTV deals and how they are currently evolving. The panel included Henry Embleton from Crunchyroll, Jason DeMarco from A+E Networks, Seho Lee from Unruly & Publica Co-Founder & CEO Ben Antier. The live conversation with over 250 people registered to view was moderated by Sarah Whitcomb from Publica.

The full webinar can be watched below, this is also hosted on the Publica YouTube channel:

The conversation explored many areas in CTV that are currently shaping the types of inventory deals publishers are surfacing & advertisers are looking to target. Below are some of the topics discussed & time stamps to help you navigate the webinar if looking to focus on one particular thread of the discussion.

With so many acronyms for ad funded streaming television, it can often be confusing to establish what people are referring to when they speak about the ‘CTV opportunity’. From AVOD to FAST, CTV to IPTV, hear the speakers talk about what they define as the opportunity and where we are at on the journey of consumer adoption and advertiser demand. When it comes to CTV adoption “Escape velocity is ensuing” said Henry Embleton. “The growth in CTV has been so sudden & so quick!” Said Jason DeMarco when talking about the scale of deals now available to advertisers.

With more AVOD apps launching on a monthly basis, it can at times be difficult for publishers to grow their share of ad budgets due to the number of competing services all looking to secure demand for their streaming PMP deals. “It’s going to be Living Room vs Digital” Said Seho Lee when talking about how planners may start with CTV and then work the entirety of their digital budgets around the big screen. “We see an incremental base of advertisers entering CTV for the first time” said Jason DeMarco when talking about how ad budgets are not only just migrating from traditional TV but also digital & social to the big screen TV for the very first time.

CTV publishers are uniquely placed when it comes to audience data & insights due to the direct relationships they have with their viewers. However, activating this data & making it available to target in a privacy compliant way via PMP’s has not always been easy for publishers due to the technical limits of the advertising infrastructure available to them. In this segment of the webinar, the panelists discuss best practices & how they are curating their data segments to help increase yield & drive demand for their PMP’s & programmatic guaranteed deals. “The most important use of data in CTV today is to illustrate incremental audience reach” Said Ben Antier when talking about audience discoverability & how it is becoming increasingly difficult to reach certain viewers via traditional TV due to cord cutting or other channels due to an absence of identifiers.

30:50 A world without 3rd party cookies – predictions for CTV?

With so much attention on 3rd party cookies & mobile device IDs at the moment, many app based CTV publishers have been asking what their future looks like when it comes to the application of identity across their streaming deals. Thankfully, many CTV publishers today operate outside of the controls being enforced by the likes of Google & Apple that are restricting the ID’s available to mobile & web based advertisers. However, CTV publishers still need to ensure they operate within their local privacy laws & in this section of the discussion, we hear from the panelists why they feel CTV publishers will benefit this year from all of the programmatic demand that will be allocated to CTV deals due to the fact advertisers & DSP’s can still manage things like reach, frequency & attribution due to AVOD apps sill passing device ID’s. “The growth in CTV ad buys this year will in part be driven by digital buyers looking to offset reach & targeting issues in web based display buys” said Jason DeMarco.

Traditional TV ad budgets are never going to fully migrate to streaming apps until the controls that have been available to them in linear TV for the last 50 years exist in CTV ad buys also. Competitive ad separation, frequency & ad deduplication are all components of a TV ad buy be it traditional or CTV that advertising agencies expect from their deals being show on the living room big screen. In this segment of the webinar, we hear how advanced ad break management by publishers is enabling them to capture a higher yield for for their inventory when it is delivered via an ad pod, ensuring the viewer has a seamless TV like experience & advertiser the controls required to extract a stronger ROI. “You never want to drive a user experience that is negative for the brand” Said Seho Lee when talking about the benefits of ‘ad pods’ and the importance of streaming publishers adopting this approach to their ad breaks. However, there are “Still a lot of publishers that don’t implement pods” in their ad breaks said Ben Antier and this will reduce their ability to capture programmatic ad budgets moving forwards.

43:50 What role will programmatic guaranteed deals play in CTV?

The value of good quality streaming inventory is high and as a result, Publica believe many publishers will continue to control it tightly and only let direct sellers and those engaged via programmatic PMP’s and programmatic guaranteed deals access it, rather that surfacing in the open exchange. In this part of the webinar, we hear from the panelists about how they are approaching PMP & PG deals. “We have really embraced programmatic guaranteed, in fact, we saw a big increase in PG deals and commitments at this years up fronts due to the fact it enables agencies to lock in inventory and then apply all of the targeting capabilities that programmatic buying supports, its the best of both worlds, direct & programmatic” Said Jason DeMarco. To truly take advantage of programmatic guaranteed deals, “publishers need the ability to forecast against audiences & prioritise buyers” said Ben Antier.

The CTV ecosystem is evolving & growing so quickly at the moment that forward facing predictions can at times be difficult. However, our panel of experts all had some great thoughts on where we are heading and these are just a handful. “The CTV ecosystem will become much more simplified. The tech being built today will improve both viewing experience and advertiser controls and we will quickly overcome measurement challenges as the sector matures” “The CPM model as we know it will change to become much more interactive as CTV ad formats evolve” “Smart TV manufactures will lean heavily into advertising and vastly improve UX & AVOD App discoverability” “App-ads.txt will bring more trust and transparency to the CTV supply chain” “Sports rights may dictate the future of CTV”

For more CTV webinars, explainers & interviews with leading streaming publishers, head to our Publica YouTube channel. To speak with Publica, contact us here.